The following is an interesting article by guest author, James Gault, and was originally posted on The Voices of Literature website:

Name of Books :
Hard Times, by Charles Dickens and Ogg by James Gault

The extracts:
The beginning of Dickens’ Hard Times, where we hear Mr Thomas Gradgrind’s speech to the pupils of the school.
‘NOW, what I want is, Facts. Teach these boys and girls nothing but Facts. Facts alone are wanted in life. Plant nothing else, and root out everything else. You can only form the minds of reasoning animals upon Facts: nothing else will ever be of any service to them. This is the principle on which I bring up my own children, and this is the principle on which I bring up these children. Stick to Facts, sir!’
from Hard Times by Charles Dickens

Ogg and Antonia have been transported in time and place to a shady night club in fifties USA.
A squat balding fifty year old tuxedo with a cigar stood before them.
“You havin’ a good time?  I ain’t seen you ‘round here before.”
“We’re from out of town,” Ogg drawled, and Antonia choked on her sparkling water.
“Well, you sure picked the right place for good entertainment. I’m Harry. Harry Biaggi. This is my joint.  D’ya like it?”
“Well, yeah, Harry, I do. It’s a real nice place you got here.”
“We try to be classy. Howd’ya find us.” Harry snapped his fingers as he said this and a bow-tie appeared and slid a seat under him. He sat down.
from Ogg by James Gault

The explanation:
If we read the opening few pages of Jane Austin’s Emma we see a common way for authors to introduce characters. Emma’s family, biography and character are presented to us in intimate detail, and before we start her story we feel we know her like a good friend already, and we can sympathise with her successes and failures and feel the delights and angst which follow. For this particular novel, the detailed early establishment of the character is important because the author needs to arm us with the tools to judge Emma.
This kind of approach to characterisation is out of fashion now: it slows up the action and needs inspired writing to keep the reader’s attention, and is especially distracting for any but the very main characters.

Nowadays, we expect to discover our characters rather than be asked to judge them. We expect to get to know the characters slowly as we read their story. We form first impressions, then we develop these impressions and sometimes we misjudge and need to correct our assessments. The discovery of the characters is as important to us as the development of the plot.  The characterisation is drip fed to us, and the personality of each individual has to permeate each part of the story.
For protagonists that first impression is of prime importance, while for minor roles it is the only information we get. So we expect the author to imbue our first meetings with the characters with indications of what kind of people they are: by what they say, by what they do or by both.

The excerpt from Hard Times is only six short sentences of dialogue, but how much does it tell us about the speaker? He is self-opinionated, he at least claims to be rational, he expects to be listened to and obeyed. He speaks in short sharp sentences, in commands and assertions. No debate is permitted. We don’t know what he looks like, we don’t even know his name, but already we don’t expect we’re going to like him very much.

In the second extract, all the elements are employed to create an impression of Mr Biaggi: description, dialogue and actions.  All of this is condensed into a short dialogue. Biaggi is presented as middle aged and overweight but well dressed. He has the strong accent of a man from the gutter who has made it to the top – others jump to satisfy his every wish. But he also has an aura of feeling inferior: he is anxious to please and be liked and appreciated. In the novel his is a walk on part, we never meet him again, but he leaves an impression and sets the tone for what follows.

The point of both extracts is to note the denseness of the character information which is presented at the same time as the plot is developed. The reader has to work hard to catch all the points, but the ongoing development of the story never flags. This is what I am calling Concise Characterisation. 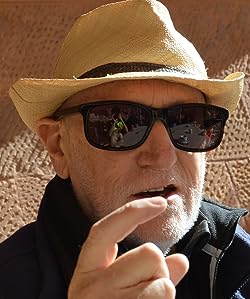 James Gault is an author of short stories, novels and English Language textbooks. He lived, worked and taught for many years in Prague, but now lives and continues to write in the South of France.

He also runs the blog Vox Lit, where authors post comments by their characters on aspects of real life.

His latest novel, The Redemption of Anna Petrovna, is due for release shortly.

Signup for updates on new releases and giveaways, bonus content and special offers!
Once you have subscribed, you will be able to download my Seers Series short story anthology, The Guardians of Sterrenvar, for FREE!!